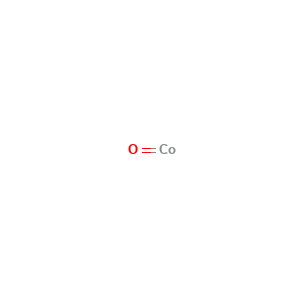 Studies on hamsters indicate that about one-third of inhaled cobalt oxide is absorbed. Twenty-four hr after inhalation of 0.8 mg of cobalt oxide, 23% was recovered in the carcass, 3% in the lung, and 0.5% in the liver and kidney together. Of the inhaled amt, 60% of the CoO (cobaltous oxide) was recovered in the GI tract. Possibly the amt of cobalt recovered in the GI was cleared from the lung since GI excretion of parenterally admin cobalt is comparably low. On the other hand, studies on rats show that the pulmonary absorption of inhaled cobaltous oxide may be considerably less. Intratracheally instilled cobaltous oxide (1.5 ug) was retained in the lung for a relatively long period with a half-time of about 15 days. This indicates that the pulmonary absorption of cobalt oxide is a slow process.

May cause mechanical irritation. Inhalation may cause asthma-like reactions.

Depending on the degree of exposure, periodic medical examination is suggested.Anyone who has shown symptoms of asthma due to this substance should avoid all further contact.The symptoms of asthma often do not become manifest until a few hours have passed and they are aggravated by physical effort. Rest and medical observation are therefore essential.Do NOT take working clothes home.