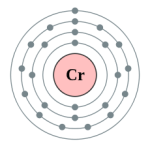 It is a chemical element with the symbol Cr and atomic number 24. It is the first element in group 6.
It is a steely-grey, lustrous, hard and brittle transition metal.
Chromium is also the main additive in stainless steel, to which it adds anti-corrosive properties.
Chromium is also highly valued as a metal that is able to be highly polished while resisting tarnishing. Polished chromium reflects almost 70% of the visible spectrum, with almost 90% of infrared light being reflected.
The name of the element is derived from the Greek word χρῶμα, chrōma, meaning color, because many chromium compounds are intensely colored.
Chromium is a naturally occurring element found in rocks, animals, plants, soil, and in volcanic dust and gases. Chromium is present in the environment in several different forms. The most common forms are chromium(0), chromium(III), and chromium(VI).
No taste or odor is associated with chromium compounds. Chromium(III) occurs naturally in the environment and is an essential nutrient.
Chromium(VI) and chromium(0) are generally produced by industrial processes.
The metal chromium, which is the chromium(0) form, is used for making steel. Chromium(VI) and chromium(III) are used for chrome plating, dyes and pigments, leather tanning, and wood preserving.