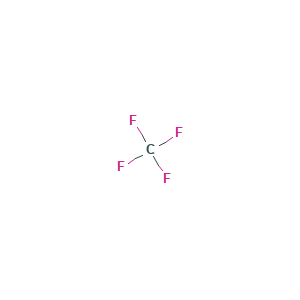 ON FROSTBITE: rinse with plenty of water, do NOT remove clothes. Refer for medical attention .

Excerpt from ERG Guide 126 [Gases – Compressed or Liquefied (Including Refrigerant Gases)]: Vapors may cause dizziness or asphyxiation without warning. Vapors from liquefied gas are initially heavier than air and spread along ground. Contact with gas or liquefied gas may cause burns, severe injury and/or frostbite. Fire may produce irritating, corrosive and/or toxic gases. (ERG, 2016)

Excerpt from ERG Guide 126 [Gases – Compressed or Liquefied (Including Refrigerant Gases)]: Some may burn but none ignite readily. Containers may explode when heated. Ruptured cylinders may rocket. (ERG, 2016)

In case of fire in the surroundings, use appropriate extinguishing media. In case of fire: keep cylinder cool by spraying with water. Combat fire from a sheltered position.

Tetrafluoromethane may burn, but does not readily ignite.The gas is heavier than air and may accumulate in lowered spaces causing a deficiency of oxygen.The reaction of aluminum with various halogenated hydrocarbons produces a self-sustaining reaction with sufficient heat to melt aluminum pieces, examples of other halogenated hydrocarbons are fluorotrichloromethane, dichlorodifluoromethane, chlorodifluoromethane, tetrafluoromethane. The vigor of the reaction appears to be dependent on the combined degree of fluorination and the vapor pressure [Chem. Eng. News 39(27):44. 1961].

Incompatible materials: Aluminum, and its alloys

When heated to decomposition it emits toxic fumes of /fluoride/.

Exposure to cold gas could cause frostbite. The substance may cause effects on the cardiovascular system. This may result in cardiac disorders. Exposure at high levels could cause unconsciousness. See Notes.

On loss of containment this substance can cause suffocation by lowering the oxygen content of the air in confined areas.

AEROBIC: Highly chlorinated/fluorinated compounds are not expected to biodegrade rapidly(1).

An estimated BCF of 3 was calculated in fish for tetrafluoromethane(SRC), using a log Kow of 1.18(1) and a regression-derived equation(2). According to a classification scheme(3), this BCF suggests the potential for bioconcentration in aquatic organisms is low(SRC).

Using a structure estimation method based on molecular connectivity indices(1), the Koc of tetrafluoromethane can be estimated to be 44(SRC). According to a classification scheme(2), this estimated Koc value suggests that tetrafluoromethane is expected to have very high mobility in soil.

High concentrations in the air cause a deficiency of oxygen with the risk of unconsciousness or death.Check oxygen content before entering the area.