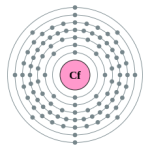 The element was first synthesized in 1950 at the Lawrence Berkeley National Laboratory (then the University of California Radiation Laboratory), by bombarding curium with alpha particles (helium-4 ions).
It is an actinide element, the sixth transuranium element to be synthesized, and has the second-highest atomic mass of all the elements that have been produced in amounts large enough to see with the unaided eye (after einsteinium).
The element was named after the university and the state of California.
Californium is a radioactive chemical element with the symbol Cf and atomic number 98.
Californium is a silvery white actinide metal with a melting point of 900 ± 30 °C (1,650 ± 50 °F) and an estimated boiling point of 1,745 K (1,470 °C; 2,680 °F).
The pure metal is malleable and is easily cut with a razor blade.