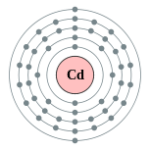 It is a chemical element with the symbol Cd and atomic number 48
This soft, silvery-white metal is chemically similar to the two other stable metals in group 12, zinc and mercury.
Element Cadmium occurs as a minor component in most zinc ores and is a byproduct of zinc production.
Cadmium was used for a long time as a corrosion-resistant plating on steel, and cadmium compounds are used as red, orange and yellow pigments, to color glass, and to stabilize plastic.
It is similar in many respects to zinc but forms complex compounds. Unlike most other metals, cadmium is resistant to corrosion and is used as a protective plate on other metals. As a bulk metal, cadmium is insoluble in water and is not flammable; however, in its powdered form it may burn and release toxic fumes.