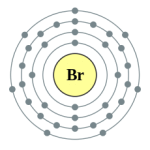 It is a chemical element with symbol Br and atomic number 35.
Element Bromine is the third-lightest halogen, and is a fuming red-brown liquid at room temperature that evaporates readily to form a similarly coloured gas.
Its properties are thus intermediate between those of chlorine and iodine.
Isolated independently by two chemists, Carl Jacob Löwig (in 1825) and Antoine Jérôme Balard (in 1826), its name was derived from the Ancient Greek βρῶμος (“stench”), referencing its sharp and disagreeable smell.