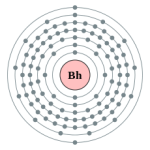 It is named after Danish physicist Niels Bohr. As a synthetic element, it can be created in a laboratory but is not found in nature.
Bohrium is a synthetic chemical element with the symbol Bh and atomic number 107.
It is a member of the 7th period and belongs to the group 7 elements as the fifth member of the 6d series of transition metals.
Chemistry experiments have confirmed that bohrium behaves as the heavier homologue to rhenium in group 7. The chemical properties of bohrium are characterized only partly, but they compare well with the chemistry of the other group 7 elements.

Bohrium has no stable or naturally occurring isotopes. Several radioactive isotopes have been synthesized in the laboratory, either by fusing two atoms or by observing the decay of heavier elements.