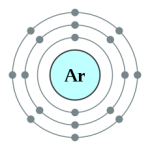 The name “argon” is derived from the Greek word ἀργόν, neuter singular form of ἀργός meaning “lazy” or “inactive”, as a reference to the fact that the element undergoes almost no chemical reactions.
The complete octet (eight electrons) in the outer atomic shell makes argon stable and resistant to bonding with other elements. Its triple point temperature of 83.8058 K is a defining fixed point in the International Temperature Scale of 1990.
Argon is a chemical element with the symbol Ar and atomic number 18. It is in group 18 of the periodic table and is a noble gas.
Argon has approximately the same solubility in water as oxygen and is 2.5 times more soluble in water than nitrogen. Argon is colorless, odorless, nonflammable and nontoxic as a solid, liquid or gas.
Argon is chemically inert under most conditions and forms no confirmed stable compounds at room temperature.