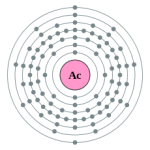 It is a chemical element with the symbol Ac and atomic number 89. Element Actinium was first isolated by French chemist André-Louis Debierne in 1899. Friedrich Oskar Giesel later independently isolated it in 1902 and, unaware that it was already known, gave it the name emanium
A soft, silvery-white radioactive metal, actinium reacts rapidly with oxygen and moisture in air forming a white coating of actinium oxide that prevents further oxidation.
A trivalent radioactive element and the prototypical member of the actinide family.
Owing to its strong radioactivity, actinium glows in the dark with a pale blue light, which originates from the surrounding air ionized by the emitted energetic particles

Naturally occurring actinium is composed of two radioactive isotopes; 227 Ac (from the radioactive family of 235 U) and 228 Ac (a granddaughter of 232 Th).
227 Ac decays mainly as a beta emitter with a very small energy, but in 1.38% of cases it emits an alpha particle, so it can readily be identified through alpha spectrometry.