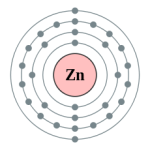 It is an element with atomic symbol Zn, atomic number 30, and atomic weight 65.39.
Zinc is an essential mineral and heavy metal that is included in most over-the-counter multivitamin and mineral supplements, and is used therapeutically in higher doses because of its ability to block copper absorption as maintenance therapy of Wilson disease.
Element Zinc has not been associated with worsening of serum enzyme elevations during therapy or with clinically apparent liver injury.
Zinc atom is a zinc group element atom. It has a role as a micronutrient.

Zinc isotopes are used extensively in both industrial and medical applications. Depleted Zn-64 is added to the cooling water of nuclear reactors in the form of oxide or acetate to prevent stress corrosion cracking.
It also reduces the release of (stable) Co-59 into the cooling water by forming a thin spinel layer on the Co containing steel surfaces. Neutron irradiation of Co-59 will result in the formation of Co-60, a radioisotope which emits high energy gamma radiation and is a major contributor to the dose rate of personnel working in the reactor.
Enriched Zn-67 is often used in biological research into the uptake of Zn in the human body. It can also be used for the production of radioactive Ga-67 in smaller cyclotrons. However, by far most Ga-67 is made from Zn-68. Zn-67, Zn-68 and Zn-70 can all be used for the production of the therapeutic isotope Cu-67. Zn-66 has been proposed as an alternative target for the production of Cu-64 and Ga-67.
Finally Zn-70 is also used in biological research and in research into super-heavy elements.